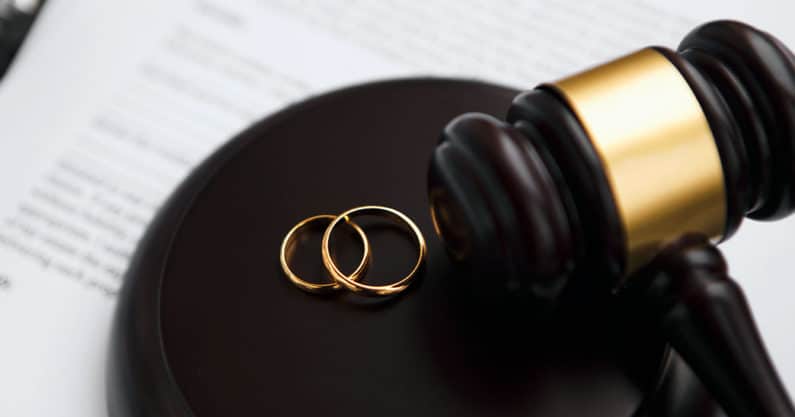 They are both a means to an end. An annulment effectively scrubs the wedding and marriage from the history books. Divorce acknowledges that the union existed but terminates it in a legal sense.

Reasons for an Annulment

An annulment is the path to ending a marriage that, in a way, pretends it never happened. Annulment may be preferred by some because it helps avoid the shameful stigma of failure. One or both parties wish the union hadn’t occurred at all and want it scrapped and forgotten.

But annulments aren’t easy to come by. Here are reasons why an annulment may be granted.

When actress Renée Zellweger filed for an annulment from singer Kenny Chesney after just four months of marriage, she cited fraud as her reason for doing so. She was eventually granted the annulment.

Fraud could mean any number of things. One spouse could have lied about something that deeply impacted the other spouse. And that could be about anything from their ability to have children, the wrong sexual preference, marrying to gain citizenship, or one of them could’ve been underage at the time they married.

Some time ago in the UK, twins who were separated at birth found out they were siblings after getting married. They later successfully sought to have their marriage annulled in a secret court hearing.

Although rare, unintentional incest does happen. In those cases, courts must give room for the events to quietly be cast aside.

Bigamy occurs when a person marries someone while still legally married to a prior spouse.

A lack of consent applies most to cases in which one person is coerced into marrying another. This is perhaps most clear with teen brides in certain fundamentalist religions.

A number of years ago, Britney Spears was hanging out with her childhood friend, Jason Alexander, in Las Vegas. The two got married one night and, barely 55 hours later, the marriage was annulled.

This happens when one or both spouses enter a marriage without fully understanding the consequences. Sometimes mentally capable people marry someone with an intellectual disability and take advantage of the person.

g. No consummation of the marriage

A marriage in which the parties did not engage in sexual activity can end in an annulment.

In the past, marriage was inaccessible to same-sex and interracial couples. Thankfully, we are becoming a more progressive society. But there could be actual legitimate reasons for a marriage to be considered an illegal union that we haven’t covered here.

In certain religions, like the Roman Catholic church for example, you can actually receive a religious annulment after getting a civil divorce. This annulment allows both parties to remarry someone in their religion.

Divorce, or the dissolution of a marriage, is complicated. Depending on your state, you may have both no-fault and fault divorce options. In a no-fault divorce, neither is blamed for the breakup and you don’t necessarily have to supply a reason.

In an at-fault divorce, one spouse wants the other to have the responsibility of being blamed for ending the marriage. Many states, however, no longer recognize fault divorces. An at-fault divorce may have been affected by issues such as:

The particular problem could be a serious addiction to anything from drugs and alcohol to gambling and sex.

One or both spouses could have had affairs.

Whether physical or emotional, one spouse subjects the other to domestic abuse.

Sometimes one spouse will leave the other.

One spouse could have developed an incurable mental illness.

If one commits a crime, is convicted, and is sent away to prison for a significant amount of time.

b. Objections to at-fault divorce

You can object to an at-fault divorce for these common reasons.

In collusion, both spouses agree that one of them will take the fault for whatever allegation the other cooked up. It was a common practice long ago when two people grew tired of their marriage and wanted an easy way out.

Condonation (related to “condoning”) is the acceptance of a certain type of bad behavior. If the marriage was an open one, and one of them tries to file an at-fault based divorce claiming adultery, it’ll backfire. It can be difficult to prove condonation due to lack of documentation.

Connivance is about setting a partner up. It happens when one suspects the other is cheating. An elaborate scheme is hatched to catch the deceitful partner in the act.

For example: Say a woman knows her husband is struggling with sex addiction. She invites her female friend over to entice her husband into doing something improper. The wife arrives home to find her man in bed with her friend, just as she planned.

In court, she alleges adultery. However, he could argue that his wife set him up and connived him into it.

Someone made you do it. If a wife accuses her husband of domestic abuse, he could claim she provoked him by hitting him first. It’s taboo to talk about this but male domestic violence exists. In these cases, men are victims just like women.

Often, men stay in bad relationships and this may involve a significant degree of denial. They may, for example, want to protect their children. Perhaps their church encourages them to continue to work on the union. Men may persist for the same kinds of reasons that women do.

Final Words on Divorce vs Annulment

At the end of the day, most courts want to have a solution to the problem of an unhappy union. That could mean an annulment or divorce. Ending the marriage isn’t especially difficult. After all, courts aren’t interested in keeping people together when one or both parties clearly want it to end.

Whichever occurs depends on your specific set of circumstances and your state’s laws concerning whether you are allowed to file and be granted either an annulment or divorce.