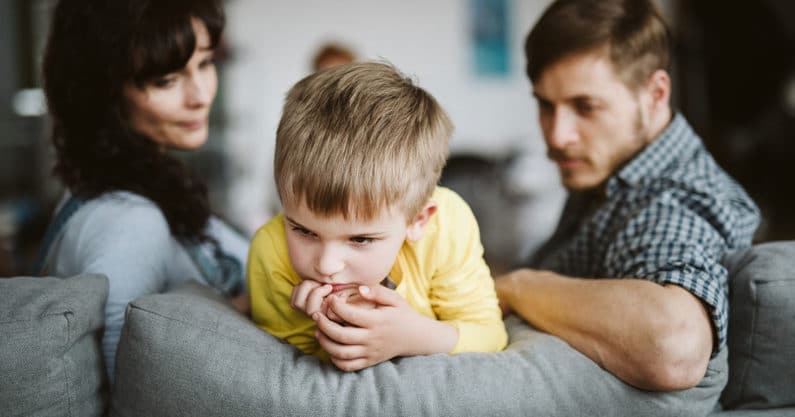 The video below of a little girl asking her divorcing parents to be nice to one another and to stop fighting went viral. It spurred the question – what does a positive co-parenting relationship look like? Here, one parent weighs in.

I have been separated from my daughter’s father for almost three years. Our marriage wasn’t working, and it dragged out far longer than it should have.

When we finally separated, we had to live together for several months while we tried to sell the house. The situation was sticky and uncomfortable.

I will admit, at times, we let our anger and sadness get the best of us. We fought in front of her (I’ll call my daughter Nameo here). She was almost two at the time. It’s not my proudest moment as a parent.

Living together while we went through the separation and divorce process was one of the worst things we could have done. One night my then-husband and I reached our breaking points.

We had a horrible fight in front of Nameo. The confrontation was something she should never have seen. We knew we had to change. After the fight, we agreed to only talk through our lawyers until we could begin mediation. That turned out to be the break we both needed to clear our heads.

Help in the Form of Mediation

Shortly after the fight my now ex-husband moved out and we hired a mediator to help us with our separation. Mediation was the only type of communication we had during that time, which allowed us some space away from one another.

Generally, I believe, frequent communication after separating is a bad idea because you each need to move on with your lives. Less interaction also reduces the potential for conflict. Indeed, many divorced parents opt for limited, text-based communication for co-parenting.

Agreeing on a Custody Arrangement

It also hit us straight on that we needed to work together or we could seriously impact our daughter’s happiness. We had a lot of heavy issues to deal with. But we both agreed that Nameo was our top priority and we needed to work as a team for her sake.

We faced some conflict over custody and money issues when we were in mediation. Coming up with a parenting agreement, which makes for a more business-like and rule-based relationship compared to what we had before, was a challenge. But once our daughter’s schedule was sorted out, we respected the arrangements made.

We made sure that, when Nameo was with one parent, she was still in contact with the other. Today she is four, and we still call her almost every night. Those calls also give us an opportunity to chat with the other parent about anything that needs to be discussed. If the subject pertains to Nameo’s behavior or we think we may have a disagreement, we talk on the phone later when she isn’t around.

We agreed to never speak negatively about the other parent to Nameo. We also informed our families to do the same. For us, our separation didn’t mean we had the right to take away love and a cohesive environment from our daughter too.

When it comes to parenting Nameo, her dad and I do things a bit differently from each other. That is completely normal. But there have been times when Nameo has thrown temper tantrums for me and her dad has extended the penalty to his house too.

Generally, if I’ve removed my daughter’s privileges for something serious, he has done the same – it’s all about letting her know we are a parenting team, even if we don’t live together.

We have also tried to be cooperative about our custody schedule with Nameo. We will mostly follow our set arrangements of one week on and one week off, with a day in the middle for the other parent. But we know there are times when we may want to shift days around and, thus far, that’s okay.

Almost three years into our separation, Nameo’s dad and I consider ourselves friends and excellent co-parents. A few times this year we have joined together for our daughter’s birthday, dinners, and other events.

One evening, the three of us attended a dance show and Nameo was being very loud in her seat. I directed my attention to settle her down, while my ex didn’t feed the behavior. In other words, we both felt at odds with each other’s parenting style and how we were choosing to parent our daughter in that moment. We both bit our tongues until we had a chance to talk about it over the phone, away from Nameo. In the end, we had to agree to disagree but we both saw each other’s perspective better.

We are now at a point in our friendship where we not only share the funny antics of our daughter, but also give parenting tips, and talk about things going on in our lives. We try to support each other and fill in where the other parent may have not had the strength – probably even more teamwork than when we were married.

I generally still look after paperwork related to Nameo and we both value each other’s strengths and interests when it comes to broadening her horizons. I think I may always cringe at the idea of Nameo on a BMX bike or skateboard. But I know these other type of interests also teach her different types of fun and good qualities like self-control and confidence. On the other hand, I have introduced her to a love of music, dance, and theater.

A United Front and Team

‎Nameo’s dad and I have often talked about how good it feels to know she can see us working together as a unified front. Sadly, it doesn’t seem to always be the case when it comes to divorce with kids in the picture.

We know that, if we can’t provide our daughter with a family that lives in the same house, we owe it to her to build a bridge between our homes so she still feels like part of a team.