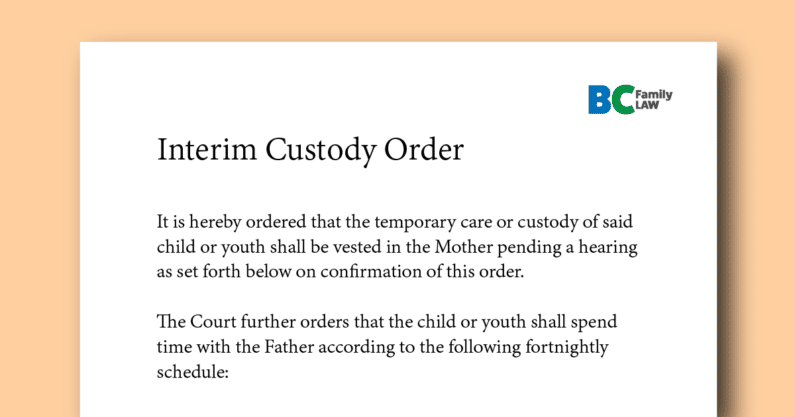 An Interim Custody Order is a legal document that assigns parental responsibility for a child or children during a custody proceeding. The order addresses decision-making affecting the child or children, visitation times if applicable, and possibly child support payments as well.

An interim custody order has the same meaning as an order for interim custody of a minor child. They both refer to a legally enforceable document that dictates who is responsible for a child at any given time. Lawyers use the word “minor” to indicate that the order doesn’t apply to adult children.

An Interim Custody Order Is a Formal Arrangement for Child Visitation

An interim custody order is a formal arrangement detailing who is responsible for caring for a child, including legal custody, decision-making and physical custody. Interim orders are put in place quickly by the family court to give structure to the parenting of a child where the parents aren’t an intact couple. Interim (or “temporary”) orders are typically made without a long court hearing.

The orders may or may not be agreed by the parties. A judge could:

Few court actions are more emotionally charged than those involving child custody. They typically arise as a result of a broken marriage or paternity case, though grandparent claims to custody happen as well. It is always preferred that the parents involved in a custody action attempt to reach an agreement regarding child custody and visitation.

In most jurisdictions, a temporary custody agreement between parents will still require the approval and acceptance of a judge for the agreement to become legally enforceable. It is not uncommon for a judge to modify an agreement based on his or her evaluation of the circumstances of the case. Nevertheless, custody agreements reduce tensions and usually result in less stress for everyone involved, including the children.

While parents may come up with an informal temporary agreement that they both adhere to, many situations arise where this kind of cooperation breaks down. Disputes and co-parenting disfunction can happen due to miscommunication, intractable disagreements on specific issues, or a general lack of trust.

Proceedings involving the custody of children are usually time-consuming, requiring multiple hearings that can literally extend a case for months or even years. This is especially true in divorce cases where complex property distribution issues are also in play.

Who is Given Custody in Interim Custody Orders?

Traditionally, the “who gets the kids” decisions were resolved by the courts with one parent or caretaker receiving the bulk of the time with the children. They also were assigned virtually all decision-making authority. The other party received limited visitation and little input regarding their child’s activities and medical care.

Over time, the winner-take-all approach was replaced in most jurisdictions with “parental sharing”. Under a shared care model, the parties receive, as much as is practicable, equal time with the children. Each parent is expected to have a meaningful role in all aspects of a child’s life, including school days, overnight stays, and vacations.

In nearly all cases, parents are assigned joint legal custody, meaning parents have equal input into important decisions such as where a child will attend school. In addition, a visitation schedule is normally established. Sole custody would be an unusual interim order in the absence of serious issues of domestic violence, substance abuse or child abuse.

How an order is obtained depends on the status of the case. If the parties have worked out an agreement, it is presented to the judge for his or her sanction.

When no agreement has been reached, at least one, and sometimes multiple hearings, are required upon motion and notice by a party where testimony is received.

In some cases, interim orders will be entered by the court on its own motion and sometimes without hearing, or when only one side has communicated with the court. This extraordinary procedure is usually restricted to situations where exceptional circumstances exist, such as when there are accusations of spousal or child abuse.

Interim orders for child custody often become permanent in the sense that the final orders are similar to the interim orders. This is also true of a temporary agreement between parents. Ensuring the interim order is a good one and sustainable over the long term is important therefore.

One of the reasons why interim orders become permanent is that the interim order establishes a post-separation care pattern. If the child appears to be doing well, judges tend to be reluctant to make changes. The best interests of the child may appear to be served by the existing arrangement. Doing something different could be seen as risky.

In addition, interim orders establish a negotiating position for both parties. If, for example, one parent only saw their child every other weekend for the past year, the parent might find it difficult to argue that they should become the main carer.

How to Get a Temporary Custody Order

You may need to supply the details of the orders you seek in a separate form or as part of your application (or response to an application) for custody of a child. Your proposed temporary custody schedule will be a key part of your submission.

Ideally, the parties to family law proceedings (normally the Applicant and Respondent) will agree to proposed interim arrangements for the care of a child. In these cases, the judge will likely to make the same or similar orders to what the parties request.

When the parties don’t agree, the judge will review the arrangements proposed by each party and make a decision about care and visitation for the child. They may be inclined to base the order on one of the orders sought by the parties or on the recent custody pattern.

The supporting information you provide in seeking a temporary custody order should be concise. The matter is to be decided as part of a short hearing. The judge likely won’t be interested in examining lots of detailed evidence, especially where there may be disputes over facts.